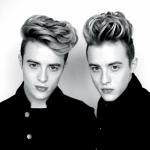 John and Edward, in speaking to RTE1’s Derek Mooney today, announced their next single shall be “Ferocious”, with the release date of October 24 to coincide with their Dublin concert date.  They also suggested they might have a CD signing on that day.

The Dublin twins will fly out to LA next week to make three music videos.  One of which, “Leave Your Mark”, will feature legendary Hollywood star, William Shatner.  Also mentioned as likely having roles in their videos are other Jedward friends, Tara Reid and Perez Hilton.

Limited tickets are still available for Jedward’s concerts in