Jedward Get Spooky For Halloween

Twin Pop sensations, John and Edward Grimes, collectively known as Jedward, gave their fans a spooky treat at their concert in Killarney, Ireland, on Sunday night.

In honour of Halloween they donned skeletal T’s and Jackets to perform their famous rendition of Ghostbusters. 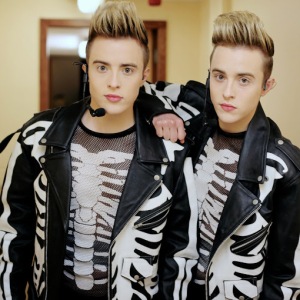 The song was one of the original tracks the twins performed when they first came to the public’s attention, on X Factor UK in 2009 and is still a firm favourite.

The Duo, who are set to tour Australia next month, put on an entertaining show, as usual, delighting their audience with a mix of old and new songs, as well as some inspired covers, such Calvin Harris’s Feel So Close.